Suaahara works with all female community health volunteers (FCHVs) along with motivated field supervisors to promote key behaviors for “1,000 day” households including pregnant women, mothers of children under two years of age and their families.  Mothers support each other as they try new behaviors, and adopt and maintain them.

After the massive earthquake of 7.8 Richter scale rattled Nepal on 25th April, it left extensive damage to buildings and thousands of deaths and injuries. In Sindhupalchowk alone 3,440 people died of which maximum were women.

Despite the loss and tragedy, women from three different wards in Sangachowk VDC huddled together for mothers’ group meeting under a tent. Led by three female community health volunteers (FCHVs), the meeting aimed to discuss personal tragedies as well as healthy behavioral practices that would benefit the thousand-day mothers. 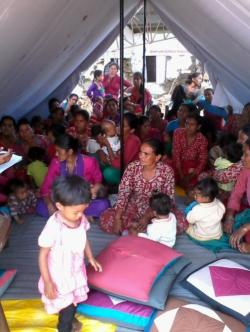 Many mothers had horrific survival experiences to share. One of the mother explained that such sharing was very helpful and particularly therapeutic. Such mothers’ group meetings usually create a community support system for women to share their problems particularly health related and seek advises and guidance.

Regardless of FCHVs own personal tragedies, they rose to support their community. In the mothers’ group meeting, the children were screened to identify severe acute malnutrition cases and were referred to outpatient therapeutic centers for treatment. Mothers were given micro-nutrient powder for their children and a food demonstration program using locally available foods was also organized. As part of the rebuilding strategy in Sindhupalhcowk, Suaahara is strengthening FCHV led mothers groups. The FCHVs desire to do more but pointed out that it would be encouraging to receive tents to conduct meetings and have a radio to have continued access to information from Bhanchhin Aama radio program as well as other national news. It is hoped that these groups will not only support to promote healthy behaviors but will also provide psychological support to help emerge together out of the tragedy caused by the recent earthquake.